You might have heard about OASPA’s annual conference COASP (for Open Access Scholarly Publishers), this year hosted by the Royal Netherlands Academy of Arts and Sciences in Amsterdam. We from Utrecht University Library Open Access Journals (also known as Uopen Journals, the open access publishing service from Utrecht University Library), have heard, seen and visited this conference for many years. And even while we are in the middle of an exciting and extensive project (transferring our open access journals to the Ubiquity Press Partner Platform), we still decided to get inspired and present ourselves at COASP from 15-17 September 2015.

The conference line up was filled with international, influential speakers covering all hot topics in the OA publishing world: #peerreview, #altmetrics, #openaccess, #evaluation, #APCs, etcetera. You weren’t there? Then you might like this overview of the most interesting talks and subjects at the conference, starting with our own top 5 talks:

1. History and Future of Academic Publishing
(Aileen Fyfe – University of St. Andrews – Aileen’s talk)
Aileen gave a wonderful presentation, entitled ‘What can history teach us about the future of academic publishing?’ showcasing results from her research. She intelligently focused on the fact that in history academic journals were often run by learned societies and other scientific organisations and they were never profitable enterprises. A commercial model has come to dominate because around the 1890s the learned societies couldn’t cope with scale enlargement. It became too expensive. Now we have other options (e.g. free distribution on the internet), so learned societies need to consider whether free knowledge sharing activities have more impact than activities underpinned by a publishing income. Another eye opener was that it wasn’t until the 1970s that people began talking about peer review as we know it today. Fyfe reinforces that widespread peer review is far more recent than we think.

2. Partnership with Patients in a New Publication

Daniel showed us how co-producing academic publications with your audience can have a great positive influence on the practical application of the content, the engagement of stakeholders and the diffusion of the publication in the targeted community. Even though this specific co-production was set up in a medical context (researchers-patients), we believe this basic concept could work in any other field! Check out the journal of Research Involvement and Engagement if you’re interested.

3. Freedom APCs
(Bryan Vickery – Cogent OA – Bryan’s talk)
According to Bryan Vickery, Director Open Access at Taylor and Francis, there can be a lot more freedom in Article Processing Charges (APCs) and therefore they are setting a trend. The Cogent Journal has announced a new trial for APC payments called ‘Freedom APCs’. This new model offers an increased flexibility to authors. They can now ‘choose’ the amount they pay as APC!

4. OpenBadges
(Kaithlin Thaney – Mozilla Science Lab – Kaithlin’s talk)
Mozilla Science is not only empowering researchers to openly collaborate on the web. They also initiated a new crediting system that acknowledges different kinds of contributions to an academic publication and openly credits the stakeholders. Hopefully these Open Badges will take on as fast as the ‘likes’ on Facebook (but will keep the intended value in the academic community).

5. DOI Event Tracker (DET)
(Geoffrey Bilder – CrossRef – Geoffrey’s talk)
We assume you all know about DOIs (Digital Object Identifiers). The key element of this DOI is of course durable findability on the web. So, if you are able to find your publication everywhere, wouldn’t it be fascinating to see where it has been and what has been happening to it? That is exactly the question CrossRef is going to answer with their DOI Event Tracker. The release of this project is in 2016 and we are very curious to see how CrossRef aims to pass on useful data to the ‘object owner’.

While these top 5 initiatives have impressed us the most, you also should check out these other…

6. Products & Services in the making

9. Familiar topics in a new perspective

10. Initiatives on a national (and market) level

We know this is a lot of information for one blog! So just choose your favorite subjects and dig in deeper using the presentations published on the OASPA website. And last but not least you can have a look at the Uopen Journals poster we presented at the conference, explaining what we do as a publishing service. 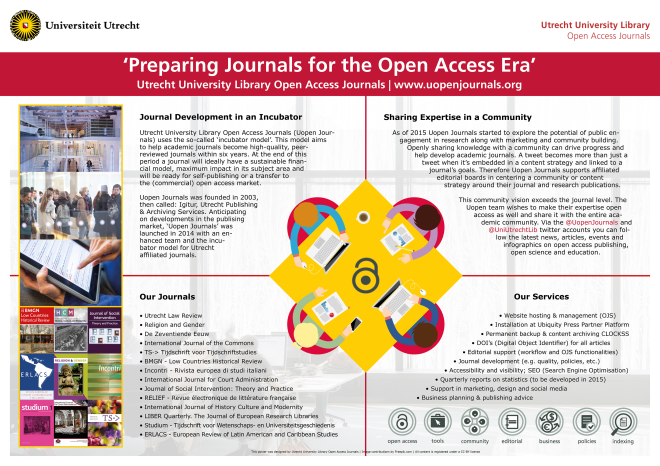